PE
PER
/sites/default/files/2019-09/Peru.png
Latin America and the Caribbean
Haiti

BE
BEL
/sites/default/files/2020-03/1920px-Flag_of_Belgium.svg_.png
Europe and Northern America
Bosnia and Herzegovina

NO
NOR
/sites/default/files/2020-03/1920px-Flag_of_Norway.svg_.png
Europe and Northern America
Poland

DO
DOM
/sites/default/files/2020-04/1920px-Flag_of_the_Dominican_Republic.svg_.png
Latin America and the Caribbean
Grenada

SX
SXM
/sites/default/files/2020-06/Sint_Maarten.png
Latin America and the Caribbean
Saint Vincent and the Grenadines

SR
SUR
/sites/default/files/2020-04/1920px-Flag_of_Suriname.svg_.png
Latin America and the Caribbean
Saint Vincent and the Grenadines

DO
DOM
/sites/default/files/2020-04/1920px-Flag_of_the_Dominican_Republic.svg_.png
Latin America and the Caribbean
Dominica

NO
NOR
/sites/default/files/2020-03/1920px-Flag_of_Norway.svg_.png
Europe and Northern America
Netherlands

PE
PER
/sites/default/files/2019-09/Peru.png
Latin America and the Caribbean
El Salvador

2. Policies and Programmes to Provide Resources to Schools

3. Education Policies and Programmes to Provide Resources to Sudents and Families

4. Social Policies and Programmes to Provide Resources to Students and their Families

At 15.8% of the 2018 total budget, the primary and secondary allocation is 6 percentage points lower than the 22% SADC benchmark.

On average, donors have consistently provided 4 times more than the government budget for non-wage spending in education

Funding provision for learners with special education needs may be problematic in a country with no legislation governing such activity and no separate funding for mainstream education and special needs activities. If the government cannot provide all the resources from state funds alone it becomes necessary to establish partnerships with potential funding partners. International donors and NGOs are obvious sources of additional resourcing, as are the business and industry sectors which have a vested interest in establishing goodwill and helping to produce a welleducated workforce (UNESCO, 2003)

Education Act Section 6 (Minimum fees for education) adds that “It is the objective that tuition in schools in Zimbabwe be provided for the lowest possible fees consistent with the maintenance of high standards of education, and the Minister shall encourage the attainment of this objective by every appropriate means, including the making of grants and other subsidies to schools”.

Without derogation from section 21 of the Interpretation Act [Chapter 1:01], in the performance of his functions in terms of subsection (1), the Minister may prescribe additional fees for instruction in special subjects or special educational courses.

4) The head of a Government school may, subject to the directions of the Secretary, refuse to admit to that school any pupil in respect of whom any fees payable in terms of this section or section fourteen have not been paid.

According to the 2014 EMIS, the median school fee paid by households is US$40 per year per primary pupil, and US$95 per year per secondary pupil. This amount varies widely, however, based on the type and location of the school. The reliance on private fees has grown in recent years, putting additional pressure on households unable to afford these payments. Moreso, with the recent move by the government to reduce funding for ECD, this heightens the risk of students dropping out of school.

The allocation of financial resources takes into account different variables:

However, it does not mention how money is allocated among these variables. À

with an estimated total of 8000 schools, and 4 million school children, excluding ECD, the US$56.8 million allocation translate to US$2,368.00 per school per term and US$4.74 per child per term – a slight improvement of US$1.27 per child per term.

“Assistance granted by Government to education institutions is reflective of the historical imbalances in the education system.

The assistance is in form of per capita grants, tuition grants and building grants. The schools are categorised according to geographical location. The categories are three, namely P1, P2 and P3 for primary schools and S1, S2 and S3 for secondary schools. In each case, 1 denotes schools found in the affluent, low density suburbs in urban areas while 2 is for those in high density suburbs in urban areas and 3 is for schools found in rural areas. The most disadvantaged – the rural schools, receive the greatest preferential treatment while those in the 1 category receive the least assistance. This ‘positive discrimination’ is meant to redress the imbalances of the past thus enhancing access and equal opportunities to all.”[1]

The education non-wage programs, (learning materials and education infrastructure), are significantly underfunded, accounting for only 6.3% of the total sector budget in 2018

In line with the increased Ministry budget, Learner Support allocation for 2018 is higher than 2017. Learner support programme was allocated a total of US$6.7 million~ 0.7% of the Ministry’s total budget. As a share of the Ministry’s total budget, this represents a 0.5 percentage point increase from the US$1.4 million allocated in 2017. Of the US$6.7 million allocation, US$5.7 million will be channeled towards the procurement of hearing aids and braille support services to learners with visual impairment; development of sign language and braille teaching and learning resource materials; provision of psychological services; and provision of supplementary feeding programmes. A combined US$98.3 million will be used on Learner Welfare Services and Special Needs Education, (Figure 11), whilst 82.8% of the budget will be spent on goods and services, with employment costs accounting for 13.9%, (Figure 11). An important program aiming to increase inclusive access, retention and achievement of academic and skills development of learners. 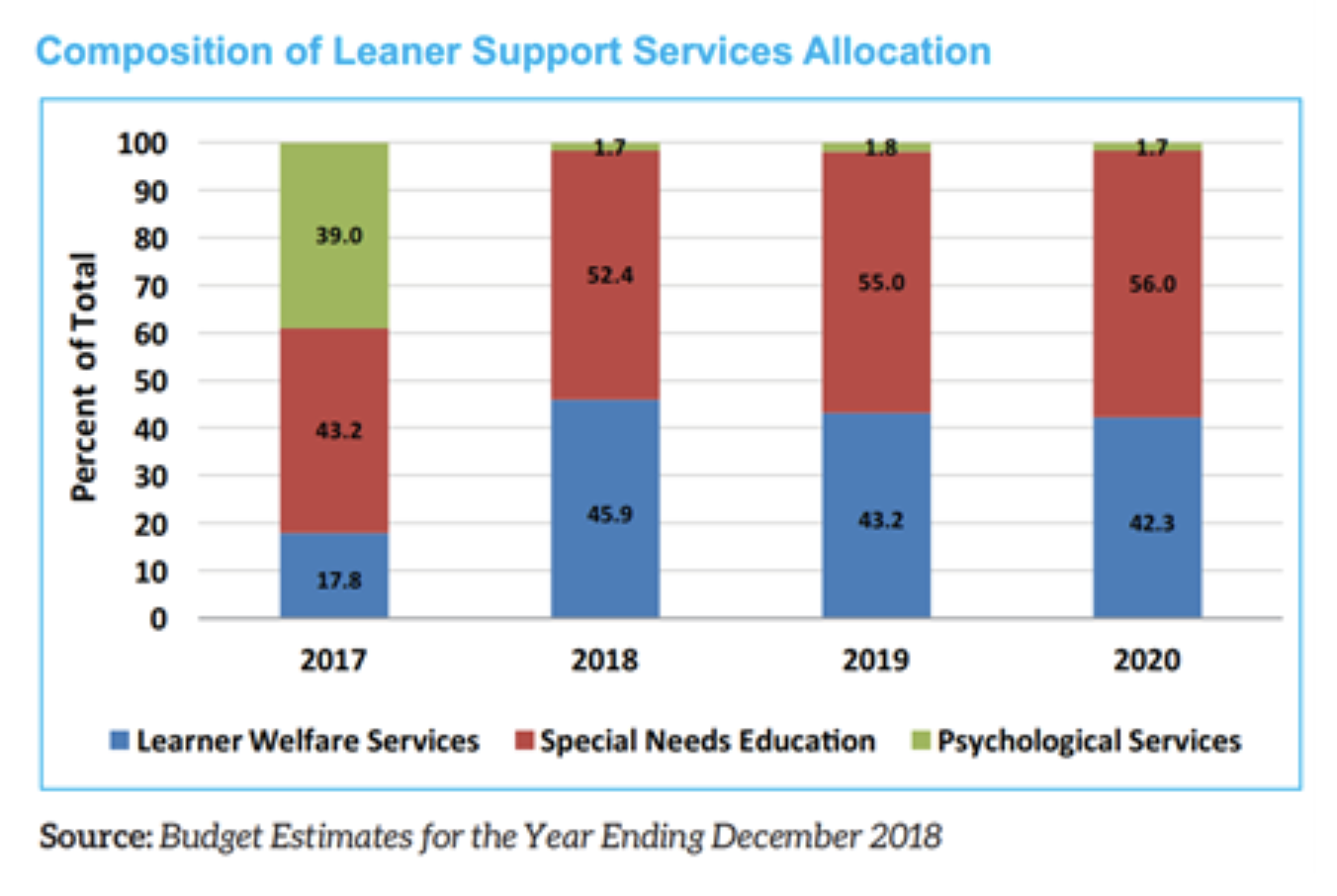 The school feeding programme aims to feed all children of primary school level from disadvantaged areas. The Treasury it allocated US$ 1 million. The allocated moneys are released to the MoESAC depending on availability of funds.”[3]

The Basic Education Assistance Module was launched by government to ensure that vulnerable children had access to education and were retained in the system. The programme, which temporarily ceased to function some years after its inception in 2000, was revitalised in 2009. Government sought and entered into partnership with the United Nations Children’s Emergency Fund (UNICEF) and the international donor community. The Ministry of Labour and Social Welfare administers the fund together with the Ministry of Education, Sport, Arts and Culture (MoESAC). BEAM assists disadvantaged children with the payment of tuition and examination fees and levies. According to MoESAC, the four education categories of people who receive assistance are:-

While BEAM was initially meant to assist children at the primary level of education, in 2010 the programme was extended to cover children at the secondary school level. In 2009 the number of targeted schools was 5,407 and the number of schools that benefited was 5,055 with the number of children benefiting at 527,330 out of a target of 560,000. The guiding principle is that 50% of the beneficiaries should be girls.

In addition any other circumstantial factors admissible to the scholarship committee will be considered.”[2]

“[The] Government has adopted a collaborative approach to care and support for vulnerable children, with programmes coordinated through the Child Protection Committees at district, provincial, and national levels. (…)

In addition to Learner Support, the government, through the Ministry of Labour and Social Services, provides funding for orphans and vulnerable children (OVC), through the Basic Education Assistance Module (BEAM). Beam was allocated US$20 million to cater for 500,000 OVCs. This is discussed in detail in the Social Protection Budget Brief. 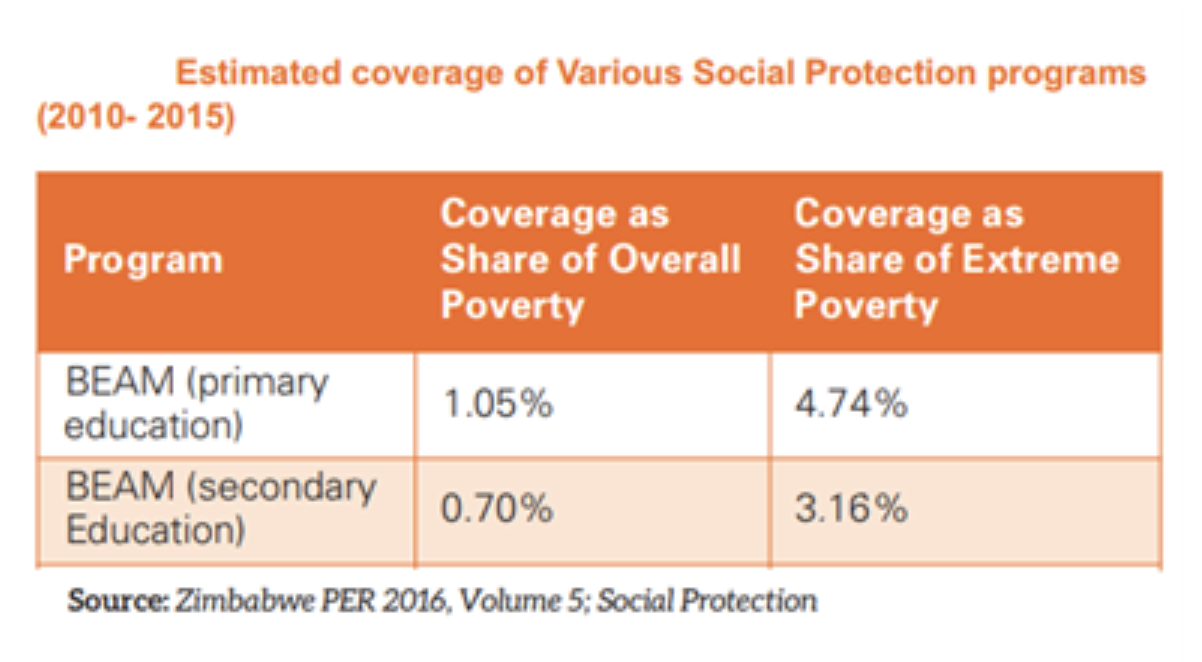 Number of vulnerable children reached with educational support under BEAM 500,000 in 2018

BEAM is already in arrears amounting to US$70million, accumulated over the past 5years, as government releases were consistently below the target. This was mainly on account of the combined effect of a binding fiscal space situation and donors support withdrawal from BEAM in 2015. In 2010, for instance, a total of 735,814 vulnerable children were covered under BEAM, through joint support by development partners and the government. As at end-2010, there were 735,814 beneficiaries under BEAM compared to 161,102 in 2016. BEAM accounts for the largest share of the Social Welfare programmes. Over the past 3years BEAM allocations accounted for 58.0% of the total social welfare budget. In 2018, the US$20 million allocation towards BEAM account for 50.3%, whilst the second largest program, the HSCT accounts for 27.7% of the 2018 allocation to social welfare, (Figure 5). Other key programs account for a combined 22.1%, of which Child Protection Services account for 8.8%, whilst Drought Mitigation and Health Assistance account for 5.03% and 6.3%, respectively of the total allocation.

The major increase in the Budget for Social Welfare is due to the increased Basic Education Assistance Module (BEAM) allocation. In 2018 BEAM was allocated US$20 million, double the US$10 million allocated in 2017. There were notable increases in allocations to the other social welfare programs, (Figure 4). However, these improvements in allocation would need to be matched by actual and timely disbursements to achieve the desired targets and outcomes for families and their children.

Increased allocation to BEAM is meant to achieve a significant improvement in coverage. With the US$20 million allocation, BEAM coverage is expected to increase from the estimated 415,900 vulnerable children to 500,000 in 2018, against an estimated, 1,045,480 vulnerable children in need of support. Hence, despite the increased allocation, 50% of the vulnerable children remains uncovered and at risk of dropping out of school. It is worth noting that BEAM is already in arrears amounting to US$70million, accumulated over the past 5years, as government releases were consistently below the target. This was mainly on account of the combined effect of a binding fiscal space situation and donors support withdrawal from BEAM in 2015. In 2010, for instance, a total of 735,814 vulnerable children were covered under BEAM, through joint support by development partners and the government 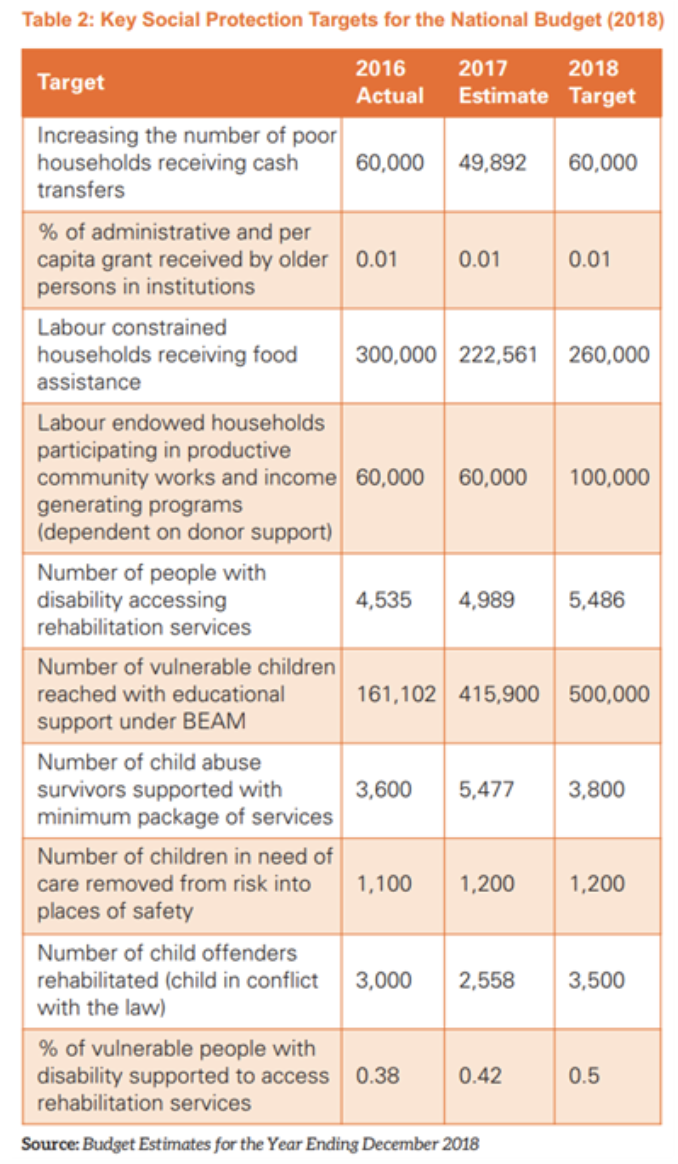 he MoLSS, responsible for social protection, allocated total of US$213.4 million, representing a 9.9% nominal improvement from the US$194.1 million allocated in 2017. The Ministry ranks 9th on overall allocations, from 8th in 2017. The Ministry’s allocation represents 3.7% of total expenditures and 1.1% of GDP compared to 4.7% of total expenditures and 1.1% of GDP in 2017.

Country
Zimbabwe
Validated by the country
No