PE
PER
/sites/default/files/2019-09/Peru.png
Latin America and the Caribbean
Haiti

BE
BEL
/sites/default/files/2020-03/1920px-Flag_of_Belgium.svg_.png
Europe and Northern America
Bosnia and Herzegovina

NO
NOR
/sites/default/files/2020-03/1920px-Flag_of_Norway.svg_.png
Europe and Northern America
Poland

DO
DOM
/sites/default/files/2020-04/1920px-Flag_of_the_Dominican_Republic.svg_.png
Latin America and the Caribbean
Grenada

SX
SXM
/sites/default/files/2020-06/Sint_Maarten.png
Latin America and the Caribbean
Saint Vincent and the Grenadines

SR
SUR
/sites/default/files/2020-04/1920px-Flag_of_Suriname.svg_.png
Latin America and the Caribbean
Saint Vincent and the Grenadines

DO
DOM
/sites/default/files/2020-04/1920px-Flag_of_the_Dominican_Republic.svg_.png
Latin America and the Caribbean
Dominica

NO
NOR
/sites/default/files/2020-03/1920px-Flag_of_Norway.svg_.png
Europe and Northern America
Netherlands

PE
PER
/sites/default/files/2019-09/Peru.png
Latin America and the Caribbean
El Salvador

2. Policies and Programmes to Provide Resources to Schools

3. Education Policies and Programmes to Provide Resources to Sudents and Families

4. Social Policies and Programmes to Provide Resources to Students and their Families

Education is the right of all citizens of Afghanistan and shall be offered for free up to bachelor degree in public education institutions. The Education Law of 2008 mandates nine years of compulsory education (primary education and lower secondary education).

The Ministry of Education  is structured around the central administration in Kabul, 34 provincial departments and 412 districts. There are more than 9.2 million students in 2015, of which 39% are girls. The number of schools has increased from 3,400 to 16,400.

Education spending is primarily consolidated under the national budget and channeled through the sector ministries (MOE and MHE). Budgeted funds at MOE and MOHE (from domestic and international funds) in 2014 were AFS 57.6 billions (US $ 760 million, 80.42% of total education expenditure), National Solidarity Programs were AFS 600 million (US $7.88 million, 0.88%), off-budget donor funds were AFS 13.1 billion and households spent AFS 300 million (US $ 170 million, corresponding to 0.41%). International development partners have contributed nearly 43 percent of all education expenditures (including off-budget) between 2010 and 2015. In 2015, contributions by international donors were AFS 24.5 billion (US $ 320 million).  In 2015, 78% of contributions by international donors were channeled through National Budget, while 22% were off-budget funding. Private household expenditures account for less than half a percent of all education spending.

The Equitable Access activity budget of the NESP estimates for 2017 are detailed in the following table (amount in million US $). The equitable access component represents 8% of the 2017 expenditure. Out of these, the establishment of Community-Based Education (CBE) and Accelerated Learning Programmes (ALP) for students with disabilities has a budget of US$ 4.6 million (representing 0.6% of total education expenditure). The recruitment and relocation of female teachers, considered the main strategy to increase school access for girls represents 0.2% of the total education expenditure. 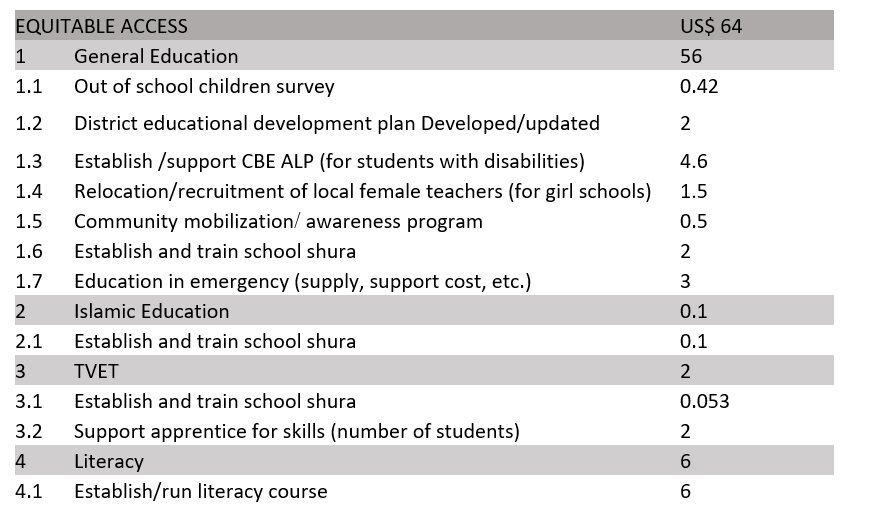 In 2019, the Government of Afghanistan, Education Cannot Wait (ECW) and UNICEF launched a multi-year (2018 – 2021) education response programme, for which an initial US$ 22 million had been secured. The new programme will support the government’s policy on community based-education and improve access to safe and reliable education annually for 500,000 most vulnerable children, including 325,000 girls.

The Education Quality Reform program (EQRA), financed by the Global Partnership for Education is a US $ 100 million project for the period 2019-2024 and aims to increase equitable access to primary and secondary education, particularly girls, with a focus on selected lagging provinces, and to improve learning conditions. In between other goals, the EQRA focuses on school construction, school grants, and expansion of community-based education. The project is expected to benefit a total of approximately 7 million students from direct project interventions, and 3.4 million out-of-school children, over the five-year implementation period.

There are no social policies targeting students and families for assisting education.

Country
Afghanistan
Validated by the country
No